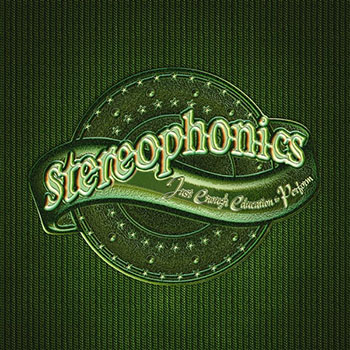 Maritim Belle Vue In Kiel is a song interpreted by Stereophonics, released on the album Just Enough Education To Perform in 2001.

I arrive in a taxi, a Mercedes Benz
I was driving along, alone, with no friends
Jumped into the Maritim Belle Vue In Kiel
You woke and you said, she said "how do you feel?"
I feel fine, so I'm signing my name

She said "you're in here tonight, you're the only one staying"

Look left down the hall, at the state of it all
The leather was brown, there was only the sound of a...
Turn off the floor, until you're your mirrored wall
Lampshades of gold, lined up on the floor, in a row

Lined up in a row
Oh no, lined up on the floor

I was hungry again, out to eat with no friend
In a restaurant, what's open, at least that's what I'm hoping
I ordered the fish, they say "went into Rome"
The waiter smiled, but he wanted to go on home
So go, go on home

The meal was good, but I'm drinking alone
I could murder a nightcap, I decided to go
The bar was empty, you asked "what you having?"
I think its a Vodka, and it looks like I'm buying again
It seems you've got your own friends

I felt like your tourist, sinking alone
The barman looked weird, so I drank me some more
I scanned round the room to see two old friends
Who were Laurel and Hardy fans and late at the end

Oh no, I should go on home
Oh no, sliding down on the floor

I got up to leave, so I finish my drink
I crushed all the ice cubes, the grapefruit was pink
I said "how long ya' been", you said "since it was new"
You said "I've always been" you said "and so have you"