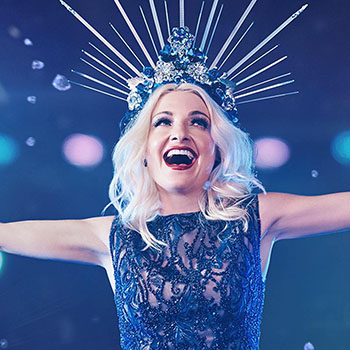 Gaydar is a song interpreted by Kate Miller-Heidke.

So they say, when trying to meet someone
You should just not try to meet someone if you know what I mean
So I tried not to look desperate at the Sound Of Music sing-a-long
Clutching my curtain costume and my lyric sheet

You know I wanted some summer lovin'
And I wanted to be cool
But the fact is, I was checkin' everybody out
Thinking maybe at the sing-a-long Sound Of Music

Oh god Kate, stop kidding yourself
But I was dressed as Liesel, he was dressed as Rolf
And our eyes locked across the sea of people
When we finally got to speak he told me he likes Annie second best
And he likes all the same songs as me

Anyway
That guy I didn't know his orientation
And neither did he, well he didn't know it yet
So he asked me out and I said yes

I guess everything was perfect
Well, come to think of it
His friend would come on all of our dates
Insisted on sitting in the front seat so he could look in the mirror

My lover was a bigger prima donna than me
With better hair, better shoes, better nails
And some other stuff well let's just leave that there
Let's face it I can't see the appeal of a real man

Someone who I can count on, to program the video and change my towels
The truth is my idea of sexy
Is a guy who knows the words to Climb Every Mountain

Anyway
One night I came out and asked him
He said he wasn't gay, he was just asexual
And I said "well what a relief"
"Well honey that's just great"
"I'm so glad we finally worked things out"

So my ex-boyfriend and I, we made a pact
If we-re still single when we're old and don't need sex anymore
We'll move in together and maybe get married
And go see all the musicals

Maybe this time
I'll get lucky
And feel that one, singular sensation again
Oh wouldn't it be lovely