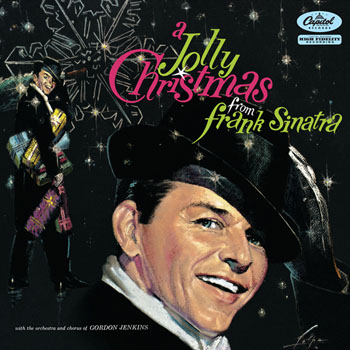 A Jolly Christmas From Frank Sinatra

The First Noel is a song interpreted by Frank Sinatra, released on the album A Jolly Christmas From Frank Sinatra in 1957.

The first Noel the angels did say
Was to certain poor shepherds in fields as they lay;
In fields where they lay keeping their sheep
On a cold winter's night that was so deep.

cho: Noel, Noel
Noel,Noel
Born is the King of Israel.

They looked up and saw a star
Shining in the East, beyond them far,
And to the earth it gave great light,
And so it continued, both day and night.

And by the light of that same star
Three wise men came from country far,
To seek for a King was their intent,
And to follow the star whereever it went.

This star drew nigh to the northwest;
O'er Bethlehem it took its rest.
And there it did both stop and stay,
Right over the place whcre Jesus lay.

Then they did know assuredly
Within that house, the King did lie
One entered in then for to see
And found the babe in poverty.

Then entered in those wise men three,
Full reverently, upon bended knee,
And offered there, in His presence,
Their gold and myrrh and frankincense.

If we in our time do well
We shall be free from death and hell
For God hath prepared for us all
A resting place in general.

A Jolly Christmas From Frank Sinatra