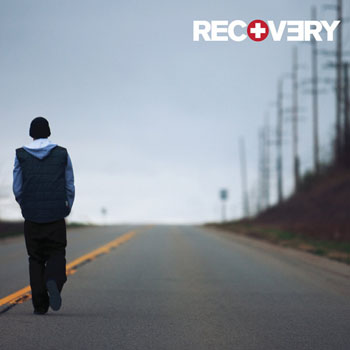 Untitled is a song interpreted by Eminem, released on the album Recovery in 2010.

Nah, man, not quite finished yet

Girl, I think you just might have just
Tried to pull a motherf*ckin' fast one, I'm mad
You just hurt my goddamn feelin'
And that was the last one I had

Does this look like an arcade?
Tryin' to play games, see the saw blade
See the silhouette of a stalker in your walkway
Better cooperate or get sautÃ©ed and rotisseried
While you're hog tied

MC's get so quiet, you can hear 'em all f*ckin' dog
Whistle when I walk by
Colt Seavers on a mule, stuntin' on that ass
Like the f*ckin fall guy

I don't gas my Mercedes after midnight
I treat it like a Mogwai
'Cause it will turn into a Gremlin
And run over kids, women and men

Vrrm vrrm, motor so big you can fit a midget in its engine
Bitch, give me them digits while you're cringin'
Not by the hair on my chinny-chin-chin
Will I spend, spend even ten cents on you?

Since when do you think it's gonna cost me a pretty penny?
Shit, if I think a penny's pretty
Just image how beautiful a quarter is to me
Eenee-meenee-miney-moe
Catch an Eskimo by his toe

While he's tryin' to roll a snowball
But don't make him lose his cool
If he hollers better, let him go, y'all

Get up, baby, get a move on like a U-Haul
You can rack your brain like pool balls
You won't ever think of this shit, yeah, honey, you called?

Well, here I come, havoc on the beat I wreak it
Evil, I see, hear and speak it
Lady put your money on Shady, f*ck that other weak shit

Unfashionable, about as rational as a rash on a fag's asshole
Now let's take that line, run it up the flag pole with Elton
See if he's cool with it, don't stand there and look stupid at me, bitch
I ain't in the mood for the shit, git my dick, Google it till it pops up

Y'all are so motherf*ckin' full of shit that your stocked up
Me, I'm always shittin' diarrhea at the mouth
Till your speakers crap out

Ha, what?
Girl, you got a hot butt like a lit cigarette
But you won't get a hot fudge Sundae from me
So do not strut my way, slut because

Not look, you little slut-cunt-whore
I know you want more
Bitch, it's time to put the math back in the Mathers
'Cause I'm a f*ckin'
(Problem)
Run boy

Every flow, got it mastered
So every last word that you f*ckin' fags heard
Comes straight from the fish's ass
Yeah, in other words, I'm a bass-terd

Lookin' at me like a killed Kenny
Gas in the tank? Yeah, still plenty
No morals are instilled in me
So remorse, I really don't feel any

Eat your heart out, Hannibal
Understandable why you're jealous
F*ckin' animal, I got cannibal magnetism
Can't resist 'em now, can ya, hoe?

Shady, I don't understand ya flow
Understand my flow, bitch
I flow like Troy Polamalu's hair, boy
Don't you dare try to follow or compare, boy

I'm raw, you ain't even medium rare
Stay the f*ck out of my hair, boy
You can look, you can stare, point
But you can't touch, I'm too clairvoyant

I don't get it, man, is there a void?
All this weak shit, what am I, steroids?
Well, bitch, I'm back with some shit for that ass
In ya trunk, elephant hemorrhoids
And remember boys

Thank you for comin' out
Hope you enjoyed the show
Until next time, peace