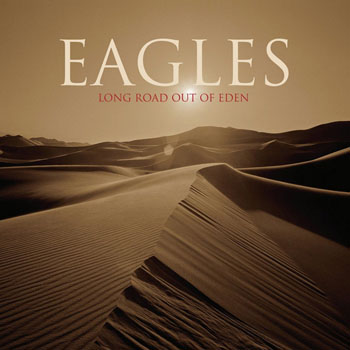 Long Road Out Of Eden

Long Road Out Of Eden lyrics

Long Road Out Of Eden lyrics

Moon shining down through the palms
Shadows moving on the sand
Somebody whispering the 23rd Psalm
Dusty rifle in his trembling hands
Somebody trying just to stay alive
He got promises to keep
Over the ocean in America
Far away, the master sleeps

Silent stars blinking in the blackness of an endless sky
Gold, silver satellites, ghostly caravans passing by
Galaxies unfolding and new worlds being born
Pilgrims and prodigals creeping toward the dawn
And it's a long road out of Eden

Music blasting from an SUV
On a bright and sunny day
Rolling down the interstate
In the good old USA
Having lunch at the petroleum club
Smoking fine cigars and swapping lies
They say, "Give me 'nother slice of that barbecued brisket
Give me 'nother piece of that pecan pie"

Freeways flickering; cell phones chiming a tune
We're riding to Utopia; road map says we'll be arriving soon
Captains of the old order clinging to the reins
Assuring us these aches inside are only growing pains
But it's a long road out of Eden

Back home, I was so certain; the path was very clear
But now I have to wonder - what are we doing here?
And I'm not counting on tomorrow and I can't tell wrong from right
But I'd give anything to be there in your arms tonight

Weaving down the American highway
Through the litter and the wreckage, and the cultural junk
Bloated with entitlement, bloated on propaganda
Now we're driving dazed and drunk

Went down the road to Damascus, the road to Mandalay
Met the ghost of Caesar on the Appian Way
He said, "It's hard to stop this binging once you get a taste
But the road to empire is a bloody, stupid waste"

Behold the bitten apple, the power of the tools
But all the knowledge in the world is of no use to fools
And it's a long road out of Eden

Long Road Out Of Eden paroles

Long Road Out Of Eden songtekst

Long Road Out Of Eden