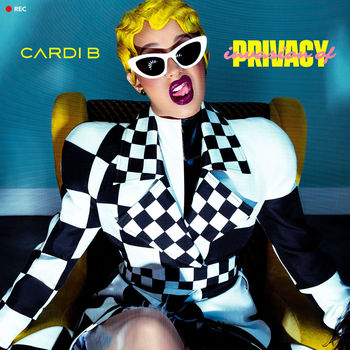 Get Up 10 is a song interpreted by Cardi B, released on the album Invasion Of Privacy in 2018.

Look, they gave a bitch two options: strippin' or lose
Used to dance in a club right across from my school
I said "dance" not "f*ck", don't get it confused
Had to set the record straight 'cause bitches love to assume
Mama couldn't give it to me, had to get at Sue's
Lord only knows how I got in those shoes
I was covered in dollars, now I'm drippin' in jewels
A bitch play with my money? Might as well spit in my food
Bitches hated my guts, now they swear we was cool
Went from makin' tuna sandwiches to makin' the news
I started speakin' my mind and tripled my views
Real bitch, only thing fake is the boobs
Get money, go hard, you're mothaf*ckin' right
Never been a fraud in my mothaf*ckin' life
Get money, go hard, damn f*ckin' right
Stunt on these bitches out of mothaf*ckin' spite
Ain't no runnin' up on me, went from nothin' to glory
I ain't tellin' y'all to do it, I'm just tellin' my story
I don't hang with these bitches 'cause these bitches be corny
And I got enough bras, y'all ain't gotta support me
I went from rag to riches, went from WIC to lit, nigga
Only person in my fam to see six figures
The pressure on your shoulders feel like boulders
When you gotta make sure that everybody straight
Bitches stab you in your back while they smilin' in your face
Talking crazy on your name, trying not to catch a case
I waited my whole life just to shit on niggas
Climbed to the top floor so I can spit on niggas
Said "I was just tryna chill and make bangers" (bangers)
Tell all these old bitches they in danger (stop)
The thing on my hip whip bitches into shape (brrrt)
That's what I call a f*ckin' waist trainer
You gon' run up on who and do what? (who?)
I think y'all got your story screwed up (yeah)
I came here to ball, is you nuts?
I don't want your punk-ass man, I'm too tough (facts)
I'm the one that's killin' shit, hands down (hands down)
If you got a problem with me, say it now (say it)
Cause I don't wanna hear no sneak dissin' (huh?)
'Specially not from one you weak bitches
I'm on go like I don't see no stop lights (skrrt)
I'm steppin' out every day, prom night (facts)
So if it's all love, show me love then (huh?)
'Cause you hatin' on a bitch, that's what it sounds like
Beast, mode, that's how I give it up, nigga
Hoodie, low, that's how I'm pullin' up
Just cause I been on the road don't mean I been on the run
And you gon' have to learn to hold your tongue or hold the gun (brrrt, woo)
And we all know you ain't that type (no)
I smack you and the bitch that you act like (yeah)
I started gettin' money, bitches upset (cash)
They remind me of my pussy, bitches mad tight
Nails done, hair lit, keep them both laced (laced)
Co-come through shinin' with a Rollie bust face (shine)
He-headshot, headshot, tell 'em closed case
Ain't no bitches spittin' like this since '08
I don't trust no nigga, I don't fear no bitch (fear no bitch)
Whole life been through some f*cked up shit (f*cked up)
They say I'm too that, oh, I'm too this
When you see what I've seen, you end up like this (woo)
I walked into the label, "Where the check at?" (where the check?)
Cardi B on the charts, ain't expect that
Where that bitch that was claimin' she a threat? (where?)
I'ma put a Louboutin where her neck at
They say I'm too ratchet, they say I act wild (I act wild, wild)
I'm tryna whip the foreign like a bad ass child (bad ass child, skrrt)
They caught me slippin' once, tell 'em try that now (try that now)
Cardi B, know it's me, hear that "blap" sound (blap)