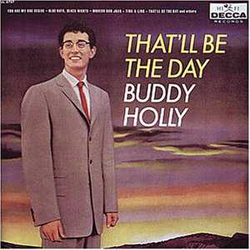 That'll Be the Day

Modern Don Juan is a song interpreted by Buddy Holly, released on the album That'll Be the Day in 0.

Well, there ain't but a-one thing puzzlin' me
I got a girl and she can't see
I want only to make her mine
Well, she thinks I'm just handing her a line

Oh, I love her so
I'll never, ever let her go

Well, ain't nothin' but a man in love

That'll Be the Day