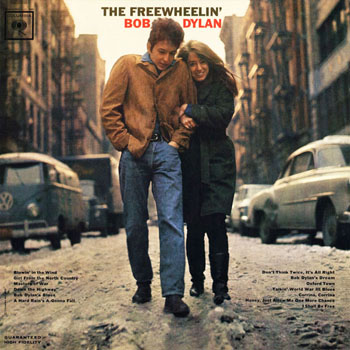 I Shall Be Free lyrics

I Shall Be Free is a song interpreted by Bob Dylan, released on the album The Freewheelin' Bob Dylan in 1963.

I Shall Be Free lyrics

Well, it took me a woman late last night
I's three-fourths drunk she looked all right
'Til she started peelin' off her onion gook
She took off her wig, said, how do I look
I's high flyin', bare naked out the window

Well, sometimes I might get drunk
Walk like a duck and smell like a skunk
Don't hurt me none, don't hurt my pride
'Cause I got my little lady right by my side
She's a tryin' a hide pretendin' she don't know me

I's out there paintin' on the old wood shed
When a can a black paint it fell on my head
I went down to scrub and rub
But I had to sit in back off the tub, cost a quarter, half price

Well, my telephone rang it would not stop
It's President Kennedy callin' me up
He said,"My friend, Bob, what do we need
To make the country grow?"
I said,"My friend, John, Brigitte Bardot, Anita Ekberg
Sophia Loren, country will grow"

Well, I got a woman five feet short
She yells and hollers an' squeals an' snorts
She tickles my nose pats me on my head
Blows me over and kicks me out of bed
She's a man eater, meat grinder, bad looser

Oh, there ain't no use in me workin' all the time
I got a woman who works herself blind
Works up to her britches up to her neck
Writes me letters and sends me checks
She's a humdinger folk singer

Now, the man on the stand he wants my vote
He's a runnin' for office on the ballot note
He's out there preachin' in front of the steeple
Tellin' me he loves all kinds a people
He's eatin' bagels, he's eatin' pizza, he's eatin' chitins

Oh, set me down on a television floor
I'll flip the channel to number four
Out of the shower comes a football man
With a bottle of oil in his hand, greasy kid stuff
What I wanna know, Mr.Football Man is
What do you do about Willy Mays
Martin Luther King, Olatunji, oh

Well, the funniest woman I ever seen
Was the great granddaughter of Mr.Clean
She takes about fifteen baths a day
Wants me to grow a mustache on my face, she's insane

Well, ask me why I'm drunk all the time
It levels my head and eases my mind
I just walk along and stroll and sing
I see better days and I do better things
I catch dinosaurs make love to Elizabeth Taylor
Catch hell from Richard Burton

letra de I Shall Be Free

I Shall Be Free paroles

I Shall Be Free songtekst