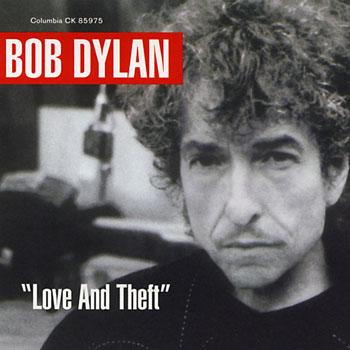 High Water (For Charley Patton) is a song interpreted by Bob Dylan, released on the album Love And Theft in 2001.

Highwater risin', rising night and day
All the gold and silver are being stolen away
Big joe turner looking east and west from the dark room of his mind
He made it to kansas city, twelfth street and vine
Nothin' standing there
Highwater everywhere

Highwater rising the shacks are sliding down
Folks lose their possessions, the folks are leaving town
Reformation shook it, broke it, then she hung it on the wall
Say you dancin' with whom they tell you to or you don't dance at all
It's tough out there
Highwater everywhere

I got a craven love for blazin' speed
I got a hopped up mustang ford
Jump into the wagon, love
Throw your panties overboard
I can write you poems, make a strong man lose his mind
I'm no pig without a wig, i hope you treat me kind
Things are breakin' up out there
Highwater everywhere

Highwater rising, six inches above my head
Coffins droppin' in the street like balloons made out of lead
Water poured into vicksburg, don't know what i'm gonna do
Don't reach out for me, she said, can't you see i'm drowning too
It's rough out there
Highwater everywhere

Well, george lewes told the englishman, the italian and the jew
You can't open up your mind, boys, to every conceivable point of view
They got charles darwin trapped out there on highway 5
Judge says to the high sheriff, i want them dead or alive
Either one, i don't care
Highwater everywhere

Well, the cuckoo is a pretty bird, she warbles as she flies
I'm preachin' the word of god, i'm puttin' out your eyes
I asked fat nancy for someth'n' to eat, she said take it off the shelf
As great as you are man, you'll never be greater than yourself
I told her i didn't really care
Highwater everywhere

I get up in the mornin', i believe i'll dust my broom
Keepin' away from the women, i'm givin' them lots of room
Thunder rollin' over clarksdale, everythin' a-lookin' blue
I just can't be happy, love, unless you're happy too
It's bad out there
Highwater everywhere